One of my favorite lines from any movie comes from Smoky and the Bandit. The characters portrayed by Burt Reynolds and Sally Fields are discussing their differences, and the Bandit observes: “When you tell somebody somethin’, it depends on what part of the country you’re standin’ in… as to just how dumb you are.” I was recently reminded of this.

For the past two weeks, Linda and I have been in Key West. Last week, I was hanging at the Hog’s Breath Saloon, one of our favorite places to chill, have a beer, and listen to live music. It’s the kind of place where you can easily start a conversation with a complete stranger.

That’s where I met Jay, who was visiting from Quincy MA with his wife and grown kids. We were about the same age, we’re both from New England, and we both love Key West. That’s enough for a drinking-buddy relationship to form, and Jay offered to buy me a round.

At one point, one of the more colorful Key West locals walked through the bar. We see him every year at Christmas time, wearing a winged Santa costume with a thong-bottom. Jay had not seen him before, and he whispered something in my ear. I couldn’t quite make it out due to the music. Rather than get dragged into a potentially homophobic conversation, I tried to divert, saying, “Yes, we see him every year, usually riding a bicycle”.

Jay then said something else. I couldn’t quite make it out, but it sounded like “Something. Something. Dilly Dilly”. I looked at him quizzically. “What?”

“Sure you do. You know! The Bud Light commercials they show during the football games.”

I could have just told Jay that I’ve been boycotting football for five years. but that would only make me more of a pariah, so, I just told him “I don’t know watch much TV”. Jay was a good sport about it, though, and he even offered to buy another round. But, I could tell that he saw me as someone who didn’t quite fit in. Standing in the Hog’s Breath Saloon in Key West, FL, I was so dumb that I didn’t know about “Dilly Dilly”.

Linda points out that I’m dumb about a  lot of things when I’m standing in a lot of places. But, at least I’ve been getting out of the house!

While I truly miss Randy Cohen’s “The Ethicist” columns in the NYT Sunday Magazine, I do enjoy reading Chuck Klosterman’s contributions.  I chuckled at the advice he gave to a concerned Hawaiian who was concerned that his wishes for good weather were harmful to local farmers. Pointing out that the writer’s desires have no impact on the weather, Klosterman advised, “What happens solely inside your mind is not cause for ethical alarm.”

By contrast, our conduct can and does have an impact on climate – and the ethical implications are profound. 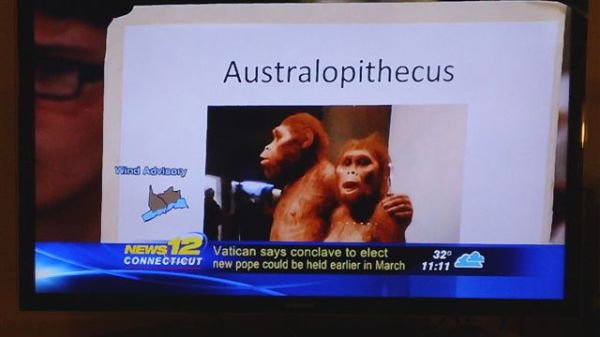 Channel 12 was good enough to cover the Darwin Day Dinner sponsored last night by the Congregation for Humanistic Judaism for Fairfield County and other organizations.  This screen shot shows a stylish Australopithecus couple immediately above a news stream: “Vatican says conclave to elect new pope could be held earlier in March.”

Synchronicity is the experience of observing two causally unrelated events and perceiving them as related. A famous example is watching the Wizard of Oz while listening to Dark Side of the Moon – If you haven’t tried “Dark Side of the Rainbow, check it out.  Darwin’s theory has much to say about why we see connections in unrelated things.  MIchael Shermer’s book and Ted Talk are good places to  learn more.  Sometimes, though, it is better to just enjoy synchronicity’s fruit!